World MS Day takes place on 30 May every year. As part of this annual event, people affected by multiple sclerosis (MS) are encouraged to share their stories, to help raise awareness and understanding of the illness.

So IP Ability committee member Debra Smith has done just that, with this wonderful personal account of her experience with MS. Debra emphasises that MS is a very personal experience, in the sense that no two people have the same experience, so every person’s account differs. Which makes it all the more important to hear those accounts, and understand more about how MS affects people. We’re grateful to Debra for sharing hers.

My Experience of Living with Multiple Sclerosis

As is often the case for tall people – in my case, 6’1″, or 1.85 m – from an early age I was always involved in lots of different sports (netball, volleyball, basketball, badminton, tennis and football, to name just a few). I also loved walking, gardening and cooking cuisines from all around the world. I studied mechanical engineering at Imperial College, University of London and was sponsored throughout my course and then went on to work in the mechanical engineering laboratory of my sponsor company, before moving to work in engineering consultancy for a firm working in the water industry. At age 25, I got a new job in intellectual property, working for the Directorate of Intellectual Property at the Ministry of Defence, where I worked until moving to the intellectual property department of a global packaging firm at about age 30. I was always very healthy and was lucky enough never to have had any medical issues (apart from the sprained ankles and dislocated fingers that come with any team sports), and I had never really needed any hospital attention.

And then, at the turn of the century, everything slowly started to change. 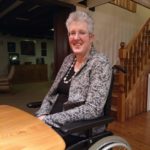 I spent the 2000-2001 millennium celebrations in Australia, watching their famous firework display. It was the holiday of a lifetime and I really enjoyed it, but things just didn’t seem quite right. I shied away from making the historic climb up the Sydney Harbour Bridge, because I just didn’t feel that I would be able to remain upright – the thought of it made my head spin!

For the next year to 18 months everything appeared “normal” to the outside world, but I had started to notice worrying trends when practising and playing netball. I played defence, but continually turning my head to follow my opponent made me feel extremely dizzy and I found it very difficult to do any training drills that involved moving backwards. I must have been worried, because I visited my GP (unheard of for me) and he advised that I see a specialist. I used my company BUPA scheme to go and visit a neurologist privately, and he gave me lots of tests including an MRI and a nerve speed test.

By this time I was tripping and occasionally falling over – not just wilting gracefully to the ground, but literally tipping forward until hitting the ground just like a tree being felled. I went back to the neurologist to find out the results of his tests and, upon being told that he was 98% certain that he knew what was wrong and asked did I want the diagnosis, I asked two simple questions about whatever it was he considered I had:

At this point, I (probably stupidly) said that if that was the case, what was the point of me knowing? I felt OK-ish and didn’t feel that “a diagnosis” would make any difference, by the sounds of it.

As my BUPA coverage was now “used up”, I started to see a neurologist at the local NHS hospital, who bluntly announced that I had multiple sclerosis. From that point onwards, every 4–6 months I had to visit his office to prove that I could walk the length of it, and then was given the OK until the next appointment when the same thing was repeated. I continued to have occasional falls, but fortunately all occurring outside work and so I only told my partner initially, and a little later my paralegal/secretary as occasionally I had to lie down in our adjacent filing room to try and quell a dizzy spell.

I had a so-called “invisible” illness, which gradually became more visible. For example, I tended to walk touching the corridor walls, which obviously started to prompt questions that only intensified when I had a couple of falls at work. Therefore finally, in 2006, I had a very tearful meeting with my line manager, followed by a slightly less tearful meeting with my HR Director. Throughout this time, I had gradually started to take so-called Disease Modifying Therapies (DMTs). However, I started to need to use one walking stick, then two, then crutches. Finally, I needed to use a small wheelchair to travel longer distances, although I could still walk a little. So now I had entered the stage where my illness was “visible”.

Over the years, I had started to become more aware of the myriad different symptoms that people with multiple sclerosis can have, and I would say that mine were relatively minor compared to many. My thought processes have never been particularly affected (apart from when that is a side effect of a drug that I am taking), which has meant that I have been able to continue working. I have never had so called “cog fog” or severe pain, including the dreaded “MS hug” (for some information on each of those, see the explanatory panel below), and primarily my symptoms are limited to mobility and manual dexterity. The former probably due to my height, which used to be such an advantage!

So I have passed through the stages of being “that tall lady” that everybody recognises and remembers (I’m afraid that I am not the shy retiring type), to “that lady that has trouble walking and has horrendous falls” “with stunning black eyes just to prove it), to “that loud lady in the wheelchair, who is quite terrifying when she actually stands up” – quite understandable, as I go from about 3–4 foot tall to just over 6 foot tall! I obviously had to change my interests and hobbies quite significantly, but it has been a real eye opener – suddenly realising first-hand all the barriers that people in a wheelchair have to overcome. It’s also had some lovely moments, because suddenly I have no longer been a terrifying giant to our smaller people and I have had quite a few lovely smiles, gurgles and even chats with children in pushchairs or trolleys, and even those wandering around the supermarket.

It’s hard, but I am a strong believer in trying to look on the positive side. So I can say that: yes, I would love to have my old life back. But I think that the experience has taught me to be much more understanding and helpful where possible.

Cog fog, the MS hug and other symptoms

The Multiple Sclerosis Trust website explains that cognitive problems, such as issues with memory, attention span, planning, decision making, understanding or concentration, are common in MS. “Cog fog” is a term many people with MS use to refer to these sorts of interferences with thinking processes.

The “MS hug” is another common symptom of MS, characterised by feeling as though there is a tight pressure around your chest, ribs or one side of your torso, which can be accompanied by painful breathing.

There are a number of good resources online providing more information about the range of symptoms that MS can present with and the way those symptoms present – for example, some are stable over time, some progressively worsen or “relapse and remit” (meaning come and go) – along with support and advice for people living with MS or who think they might have the condition. Those include the NHS, Multiple Sclerosis Trust, MS Society and MS-UK. The MS Society, among other resources, has information for employers on supporting employees with MS, and a blog from one person with MS about her experiences with telling colleagues about her diagnosis.

After 20 years of MS treated from 2000 to 2006 with Rebif(efficient to that year) and then Avonex(not efficient to calm down my lesions' number increase) i found this website ww w. kykuyuhealthclinic. com just 3 months ago, It made a tremendous difference for me I had improved walking balance, muscle strength and improved vision, always thankful for nature that helps in managing these terrible diseases.

Thank you for sharing. I know a couple of people with MS, and you are so right that it is a very individual illness, so the more awareness that can be raised, the better.