IP (even further) Out

On 14 July 2022 IP Out committee member Darren Smyth, a patent attorney at EIP, was invited to give a keynote speech at an inaugural event for LGBTQI+ professionals and their allies in the German legal and IP sectors. The event was hosted in Düsseldorf by Cohausz & Florack. The organisers hoped to establish a support network similar to that provided by IP Out in the UK, and wanted to hear more about IP Out and IP Inclusive.

Darren has kindly provided a copy of his speech, which is reproduced below. He tells us the event was hugely enjoyable and we look forward to more chances to work with this new network in the future.

I am delighted to be with you today. Thank you so much to Cohausz & Florack for their generous hospitality in hosting us, and to the organising committee for inviting me – Dr Natalie Kirchhofer and Svenja Schwandt (Cohausz & Florack), Dr Gregor Christoph Schwartze (Bayer Intellectual Property GmbH) und Dr Katharina Hesse (Hengeler Mueller).

We set up IP Out in 2016. I was personally very motivated to become involved. There had just been the shooting at the Pulse nightclub in Florida. I went to the vigil in Soho to commemorate those who had died, and I had a strong feeling that rights for LGBTQI+ people were coming under threat again. The fact that this was an attack specifically on the LGBTQI+ community was being erased from the reporting about the attack. It strengthened a feeling I had already been having that we had won our rights and freedoms, such as they were, rather quickly, and it was perfectly possible for us to lose them again equally quickly.

When I say “won rather quickly”, the progress for LGBTQI+ people in the UK has almost all happened in my lifetime. This year is the 50th anniversary of the first Gay Pride March in London, and there have been many documentaries on UK television about that period, so please permit me a historical diversion. 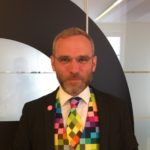 Homosexuality was partially decriminalised for men only the year before I was born, in 1969. But the scope of the decriminalisation was narrow – it applied only to two men in private, so there remained many things that were still illegal for gay men. For example, if two men met in a bar and agreed to go home together, that was “importuning for immoral purposes” and was illegal, even if what they might plan to do together once home was not. Police raided gay bars regularly, and in fact arrests for gay-related offences actually increased rather than decreased after the partial decriminalisation.

Things slowly improved somewhat, but then in 1987 Margaret Thatcher gave a speech in which she complained that children, instead of being taught traditional moral values, were being taught that they had an “inalienable right to be gay”. This is of course nonsense – being gay is not a lifestyle to be chosen, it is an inherent part of someone – you can’t change your orientation at will. Nevertheless, in 1988 the conservative government passed the notorious Section 28, which banned local governments from “promoting homosexuality” and banned state schools from teaching “the acceptability of homosexuality as a pretended family relationship”.  This had three consequences:

This hateful and discriminatory law remained in force until 2000 – only two decades ago. While the climate for LGBTQI+ people has improved since then, this could easily be reversed if we became complacent. And so there was a need for us to become more visible.

And for most of my professional career, we have not been visible.

When I went to Oxford University in 1988 to study Chemistry, I came out at the age of 19 in 1989. (Incidentally, at the time the age of consent for gay men was 21, so for two years it would have been illegal for me to have sex with another man). From when I came out, there was not a single other out gay person in the entire Chemistry department until a French post-doc joined us in 1995. There were other gay people – many have since come out. Even in Oxford, a rather liberal university (it had an active GaySoc – I was its Librarian!), many felt inhibited at that time.

I did a post-doc in Japan, and was far less open than I had been in Oxford. It seemed that there such things were not talked about.

I joined the UK’s largest firm of patent and trade mark attorneys in 1998, and I saw not a single other out gay person. Nor did I see any others in our profession. I now know there probably were a couple in other firms, but I only got to know of them years later.

So when we organised the first meeting of IP Out, would anybody come? Well, it turned out there were quite a lot of us. Mostly in the younger generations of the profession – there are still rather few of my generation and older.

Before then, my life had been rather divided. Virtually everyone I worked with was cisgender and straight, while my queer friends outside work had no understanding and little interest in what I did for a job. To be in a room where there were many other people like me, who also worked in a similar field as me, was transformative.

The theme of our first meeting was “How out can I be?” It turned out that most of us had received the same message, never explicitly stated, that although it was perfectly OK to be out in the office, we needed to be discreet in front of clients. If a client might have a problem with our sexuality, that was an avoidable problem not to be risked. So we were in fact still masking our identity a lot of the time. If a Japanese attorney asked whether I was married or single, what would I say? Would I say “actually, I have a boyfriend”? No, I would dissimulate and not be entirely honest.

The mere existence of IP Out gave many of us a route to be more open. If we posted about IP Out events on Twitter and LinkedIn, then the wider community, including our clients and potential clients, would infer our identity, and being active in IP Out gave a more indirect route to acknowledging our identity than the rather crude and potentially embarrassing “I am gay”.

We marched in the Pride marches and shared photos on social media. These could be seen by everyone, not just our colleagues. In just a short time, what was acceptable to share in a professional environment became broader.

Even so, I think for many of us it is still an issue how open to be in front of clients directly. Some of the more senior of us are completely open in all circumstances, but I think more junior ones tend to be more cautious. There is still a perceived risk that if a client was upset or offended by a reference to our sexuality, that would a problem for the individual. We are after all in a global profession and we have clients around the world where cultural and social norms may be different. I am still not sure that most firms would consider potential loss of work to be an acceptable price for supporting the wellbeing of their LGBTQI+ staff.

Now, there are gay men even at the most senior levels of our community. The chair of our regulator IPReg, Chris Smith (now Lord Smith as he sits in the House of Lords), was the first MP to come out as a gay man, and later as HIV+. The recently retired Master of the Rolls, the head of the civil justice system in England and Wales, had been open about being a gay man for his entire judicial career. And you may know David Stone who is both a partner at Allen & Overy where he is an IP Litigator, and a Deputy High Court Judge deciding many IP cases.

So, there has been a lot of progress. But there are also many areas where progress has not been so good. You will have noticed I referred to a lot of men, and women are still very under-represented in our profession. People of colour are also marginalised. And this is as true within IP Out as elsewhere.

Also, the general climate for trans and non-binary people in the UK has grown markedly more hostile over the last few years. The rhetoric used against trans people is the same as I remember in the 70s and 80s about gay people – a danger that society must be protected from them, that children are too young even to be exposed to the idea that such people exist, implying that it is a lifestyle choice rather than an inherent characteristic of someone. We say that transphobia is recycled homophobia.

Unsurprisingly therefore we have only a tiny number of trans and non-binary people in the IP professions, and understandably many of them feel that the political situation makes it hard for them to be open.

And so I am more convinced than ever, more than I was that day of the vigil in Soho, of the need for IP Out. There is still work to be done, and the need for visibility has not gone away.

IP Out is just one community within the wider IP Inclusive initiative, which brings people together in pursuit of a common goal: to promote and improve equality, diversity and inclusion within the intellectual property professions in the UK. Many times since it was set up, I and others have been asked whether we would expand abroad. We have always felt that we do not have the resources to be an international endeavour, but we have encouraged people to set up their own groups – they may be similar to ours or they may be different as the situation in each country may be different. I have explained about the history and politics in the UK, but I am sure that the situation in Germany will not be the same, and so I expect that your needs may be rather different. But to encourage other countries to consider setting up their own groups, last year we organised a webinar specifically directed at patent attorneys and IP lawyers in other countries where we shared the experiences of IP Inclusive and its different communities, for people to take from our experiences anything that may be of use.

I understand that Australia and New Zealand are setting up a Trans-Tasman initiative for diversity and inclusion, encouraged by our stories. And tonight Germany is doing something for LGBTQI+ people and allies. I am so happy to see this happen, and so excited to be here with you to share the experience. Thank you so much.

I want to end with a thought that Lord Smith gave when he spoke at a meeting of IP Out, shortly after he became chair of IPReg, in which he talked about his life and career. He said that through his life, LGBTQI+ people had made great progress in being tolerated, but that we should aspire to move on from that to being not just tolerated, but celebrated. We have a way to go to achieve this, but that is what we should be aiming for.