IP Out, our community for LGBT+ IP professionals and their allies, held a fantastic discussion event on 23 January 2020. Here’s a report from one of their committee members, Darren Smyth, and some photos courtesy of the event hosts EIP.

The first IP Out event of 2020 was the second event, following the talk from Lord Chris Smith in 2018, in which role models in the IP community shared their experiences. This time, we trialled a “conversation” format rather than the more conventional monologue.

Stuart Baran, barrister at Three New Square, provided probing but sensitive questioning. In response, David Stone gave informative insights from his very interesting life, while fully observing the code of judicial conduct. He had begun his career in Australia and then moved to England, and characteristically of his generation his experiences are informed by being the first generation following decriminalisation of homosexuality on the one hand, while facing the AIDS crisis on the other. David described the challenges of his very senior position of being Global Head of IP at Allen & Overy, which in itself involves juggling client work, administration, and supervision – then fitting around that the part time but still demanding role of being a Deputy High Court Judge. He highlighted that the Judicial Appointments Commission system opened up for the first time the possibility for many people who were not already senior barristers to seek judicial appointment at a senior level.

Both David and Stuart kindly stayed for the informal drinks and networking where the discussions continued. 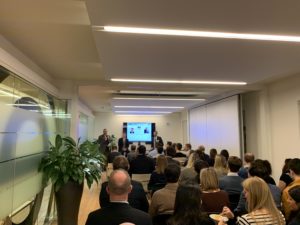 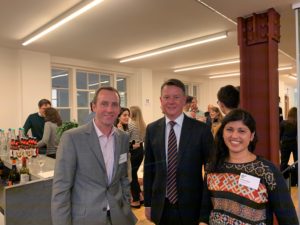