Emotions in the Workplace: Women in IP coffee date outcomes

Our Women in IP community hosted their final coffee date of 2020 on Tuesday 1 December. Co-organiser Emily Teesdale, from the Women in IP committee, reports on some fascinating – and heart-warming – discussions.

On Tuesday last week, we had our final virtual “Women in IP” coffee chat of the year. This time, we held it in the morning and the theme was “Emotions in the Workplace”.

We had 10 different Zoom calls, with around 100 participants. We were especially happy to see some men join the calls and it was great to hear their thoughts on this theme, too. These chats are, of course, always open to all genders. 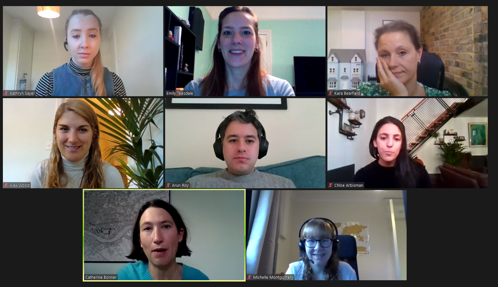 A screenshot of one of the London calls

1) Have you experienced difficult emotions at work, either as a result of work or otherwise? How did you deal with them? What tips do you have?

2) Much has been written about the different value judgments that are made about men and women showing the same emotions. Have you observed this or experienced it yourself?

3) Has our remote working situation made it easier or harder to deal with emotions at work? Has it brought us together more?

Some of the thoughts and insights on the three questions we had were (in no particular order):

1) Have you experienced difficult emotions at work, either as a result of work or otherwise? How did you deal with them? What tips do you have?

There was a general acknowledgement across the different groups that most people, if not everyone, had experienced difficult emotions at work; either because of work, otherwise, or both. The key is to talk about it and for the person on the receiving end to just listen and consider the matter. There is not a one-size fits all approach to dealing with emotions; it depends on the person.

One group discussed the importance of workplaces having procedures in place for people to speak to, such as mental health first aiders, but more often than not if someone is having a hard time they will speak to a colleague they know best. It is important to get the message across and educate people that showing emotions is not a sign of weakness and there will not be a consequence for sharing your emotions. Generally, everyone in senior positions agreed that they would want to know what is going on if someone in their team was having a bad day.

This was re-iterated in another group by the patent trainees on the call – they found it was often very helpful to let their supervisors know when they were having a difficult time. Being a trainee, and having work given back with lots of changes, is hard. Supervisors need to remember that and praise the good, not just pick up on the things that need amending.

The call in the South West (Bath)

2) Much has been written about the different value judgments that are made about men and women showing the same emotions. Have you observed this or experienced it yourself?

A lot of the groups had observed this and experienced it. Generally, women are meant to be measured in the workplace and not show emotions – whether angry or sad – that if men showed would not be judged in the same way. Eg if a man is angry in the office, people justify it as “he’s just stressed because he’s got that important meeting/urgent deadline/etc”. But if a woman is angry in the office, people put their own narrative on it like “it’s her time of the month” or “she’s a nasty person”.

One group thought that assertive women tend to be labelled as “bossy”, which (without generalising too much) might not happen with men, and that women also seem to self-label more often than men (again, without over-generalising!), applying negative labels like “bossy” to themselves. They asked if maybe women spend more time and energy questioning how they are perceived?

Others noticed that there can be a tendency to allow men to “get away with” things women are punished for. Eg a man can repeatedly rant and rave, but if he apologises after each instance, the slate is wiped clean, but if a woman does so, it is likely the behaviour will be remembered more.

On the flip side of the coin one group felt that men can be judged more harshly than women in the workplace if they get upset. Women are comforted and listened to, but men might be judged to not be coping and so on. In particular, other men have been seen to struggle with an upset man; it would often be a women who would then step in to support the upset man.

All of this means that men and women are held to different standards, which can be detrimental to everyone.

Many felt that men and women will largely feel the same emotions but tend to show them differently, and that it is probably healthier to get the emotions out than bottle things up. Men can instead withdraw – both from work and socially.

More and more though, men are finding the space to be themselves and be more open with their emotions (eg saying they were feeling under-confident one day). Sometimes sharing a perceived weakness gains the respect of others. These weaknesses are often signs of strength! One group observed that the stereotype of successful women being angry or aggressive has lessened over the years.

3) Has our remote working situation made it easier or harder to deal with emotions at work? Has it brought us together more?

Some thoughts on this topic from the different groups:

Another one of the London calls

Thank you, as ever, to all our hosts for setting up the Zoom calls and chairing the conversations. And thank you to everyone who joined us and shared their thoughts with us.

Our next coffee date (another collaboration, this time with IP Out) is planned for Thursday 14 January at 4.15 pm and will be advertised on LinkedIn and on the IP Inclusive events page soon. Please do get in touch with emily.teesdale@abelimray.com or isobel.barry@carpmaels.com if you would like to be involved in hosting one of the Zoom calls.