This guest blog is by Megan Briggs from our Women in IP Committee. In it, she shares some personal experiences – gained through competitive golf but just as relevant in the workplace – about self-confidence and overcoming fear. Whilst focused on inspiring girls into sporting and other achievements, Megan’s words will resonate with anyone who suffers anxiety or self-doubt when facing new challenges. Once you’ve read them, you might also be interested in our webinar on “Imposter Syndrome” (see here).

Megan is a Senior Solicitor at Burness Paull; her article first appeared on their blog, and we’re grateful to them for allowing us to re-publish.

Generally my blogs and articles have an intellectual property and technology theme, in keeping with the day job. However, before the legal world was even on the horizon, my passion was for that sport with a white ball and metal stick. Often known as a good walk spoiled, my experiences of competing and playing for Scotland at golf have shaped my personality and, in fact, the way I interact with my colleagues and practice law.

I was fortunate enough to play in some amazing Scottish teams and under some fantastic captains, amassing Home International wins, a European Team bronze medal and individually becoming Scottish Ladies Champion. Today, I no longer compete at that level, but keep a handicap of +1 and firmly believe that having those experiences has helped me progress, tackle University and the working world (I don’t just mean being invited to golf matches with clients, although that is a perk!).

I have recently had cause to reflect on my sporting past, when I was honoured to Captain the Scottish Girls Under 18 Team in the Home International Matches at Downfield Golf Club near Dundee. This was amongst other things a stark realisation, given that I had just turned 30 and one of my team members was 12, that I am no longer one of the young ones!

Given my background, it has always been apparent to me how important getting girls involved in sport is. Whether that be at a local club, in school or competing at a higher level, the lessons learnt and skills gained go further than being able to hit a 7 iron, a push pass at hockey or volley the football into the back of the net. Sport is an amazing vehicle to gain confidence, learn communication skills, time management, resiliency and a social element that otherwise might not be available. It is no coincidence that, after hitting tee shots and holing putts in front of spectators, public speaking doesn’t fill me with dread or that I became a litigation lawyer in keeping with my competitive nature. Of course, not everyone can be the next Olympian but the skills gained through engaging in sport, at any level, are there to be drawn upon when the moment arises.

However, despite the countless benefits (my knee and shoulder injuries aside) there remains a gap between the level of participation between men and women, girls and boys. This is particularly saddening when I consider all of the opportunities I was presented with, be that meeting new people, learning new skills or seeing different parts of the world.  So why don’t more girls show their skills?

Research has shown that one of the main factors holding women/girls back from participating in sports is fear. Whether this be fear of not being very good, fear of looking out of place or fear of choosing to be active rather than spending time with family. Sport England recently promoted a campaign to try and tackle this which included slogans such as “I’m slow but lapping everyone on the couch” and “Sweating like a pig, but feeling like a fox”. The campaign highlighted women taking part in sports, combating stereotypes and showing women of all ages and skill level participating in activity and most importantly enjoying it.

Fear is no doubt something we can all relate to, whether that be at work, in sport or family life. Whilst I had a successful amateur sporting career, fear is certainly something I encountered and perhaps never fully won the battle with. From the daunting and self-conscious prospect of being the only girl at my golf club’s junior team matches, to throwing up before junior competitions due to the fear of underperforming. I harboured the fear of not meeting my full potential throughout my amateur career, and whilst I had great days on the course, travelled to some fantastic places and made memories that will last forever, it was certainly an obstacle. Ironically, it wasn’t until I started my legal career and not able to play and compete as much, that the fear started to drift.  Perspective perhaps making a welcome appearance.

In times when fear was present, it would have been easy to let it take over and revert back to my safety zone. We all know how difficult it is to put yourself out there and not know the outcome. But had I done so, I would never have had any of the achievements, lessons learned, disappointments or friends made. Fear can be a great thing if you harness it and use it to your advantage, and even better when you overcome it. The idea of not worrying or being afraid of something before it’s actually happened is a phrase my Dad would consistently remind me of and one I tried to instil in the Under 18 Scotland team.

So whether it’s taking up a new sport or activity, going for a new job, starting a new career or taking on a new challenge, fear is par for the course, but it is also an emotion we create ourselves. Sometimes it’s as simple as, hit it, find it and hit it again, even though our minds like to try and tell us otherwise. No doubt, the girls that played in the Home International matches experienced fear, but win or lose, rain or sunshine (and there were both) they faced it, competed and reaped the benefits from it.

I hope I managed to inspire the girls team and pass on some of the knowledge I gained in encountering the fear and trying to overcome it. My wish is that they play every round with freedom, uninhibited and that this freedom follows them into their future careers and the generations that come after them. Whether they were disappointed with their result or finished triumphant, the girls will draw upon their week in future tournaments, studies or jobs, and the fact that they met fear and waved it goodbye.

Personally, I learnt so much from my time as Captain, not least that we can’t let perspective come too late and that Snapchat really is the way all under 18s communicate!

It’s time to get out there and forget the fear! 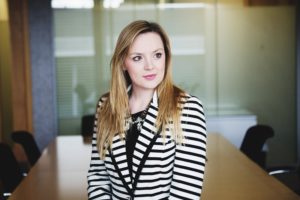