On 15 February 2022 Women in IP held one of their popular informal coffee dates, this one on the theme of “invisible labour” (or “office housework”, as it’s often called). Isobel Barry gives her final write-up as co-organiser of the coffee dates, as she and Emily Teesdale hand the baton to fellow Women in IP committee members Wendy Peet and Michelle Montgomery.

The Women in IP coffee dates have really taken off since we were all locked down in March 2020. They provided opportunities for women and allies across the UK to connect, talk about issues affecting their lives and share experiences. There were so many valuable moments of “I thought that was just me!” or “I never realised that, but now it all makes sense”. I have thoroughly enjoyed coordinating these meetings, with the assistance of our wonderful hosts all over the country (and Ireland!) and have enjoyed preparing these write-ups. However, perhaps appropriately for the theme of this post, it is time to hand over organisation to a new team who I am sure will do a fantastic job. I’ll still of course be joining the coffee dates as an attendee, so I’ll see you ther…!

The theme of my final coffee date was “office housework”, or the unseen work that is predominantly done by women in professional settings. (Thanks to Marianne Privett for the suggestion.) From making the coffee at meetings, to organising the leaving cards and Secret Santas, to updating standard letters for everyone’s use, these contributions are often expected but unrewarded, and divert time that could be spent on tasks that result in recognition and promotion. We explored this theme through three questions:

Some of us didn’t feel that we had really experienced “invisible labour” but there were others who almost felt that they saw it everywhere once they started to look for it!  Some had heard these tasks described as “emotional labour”. Women in the discussions admitted to volunteering for such tasks. These tasks were seen as valuable but not necessarily billable. Women in male-dominated areas, eg in tech, feel the burden in particular: for example, they see things being organised in the biotech department and want the same for their department, leaving the small number of women to do the organisation.

Invisible labour can involve mentoring and emotional support for others. This is incredibly valuable but also very time-consuming and can at times be a strain. Often the people coming to you don’t feel comfortable talking with anyone else so delegation is not an option. It was definitely felt that many women tend to be more nurturing and have more empathy with others. One of the group commented that we should see this as a strength and see the power in it, as we can engage more easily with others.

There was a discussion around whether women were conditioned to volunteer for such roles/tasks and a general consensus that we were. Some thought women tended to be better at spotting a need for these type of jobs to be done and recognising the importance of softer skills. Some have seen this manifested as a difference in male-run offices vs female-run offices.

Isobel chairing one of the breakout discussions

2. What steps can you take (or have you taken) to minimise this behaviour in yourself or to help others?

In one group there was a sense that for some of us, a task such as taking the meeting notes was something that they had always done – and which they did in part because it helped them personally to write up the notes as it helped to cement things in their heads – but at the same time there was an expectation that they would just simply continue to always do this. In this context we spoke about the notion of choice vs expectation, and how we should try to set our own limits – before the meeting, ask someone else to take notes and distribute them afterwards, make sure that everyone knows what their role is and what you expect of them.

There was an entertaining discussion around the option of, having recognised that you always take on a task yourself, trying just not doing it. The agreement was that watching the need not be addressed would drive a person up the wall, and one ends up giving in and doing it anyway. It is possible to suggest that another person do something, but in some cases they will simply refuse or say they don’t have time. There is the option of delegating a task, but this is more difficult for juniors, and also often means that another woman (eg a secretary) ends up carrying out the task.

We discussed the tools that can be used to say “no” and to teach others to say “no”. One can do it the first time and then when asked to do it again, explain you have done it once and invite others to take the lead with such tasks. Potential language includes “I am not willing to do that”, or ideally “I am not willing to do X but I am willing to do Y” or “my objective this year is to concentrate more on X than Y”. It is important to set boundaries – one person with issues with fatigue has done this and it is acknowledged in their office that they are protective of their time and yet still get loads done. Automation and systems can also help.

Another point of view is that we should not necessarily minimise this behaviour but increase the recognition for the work that gets done. Certainly, one should keep a record of all these contributions and remind appraisers of it at the appropriate time.

Finally, if you feel you have to take the lead on something, at least ask someone to do it with you and make a point of passing it on. 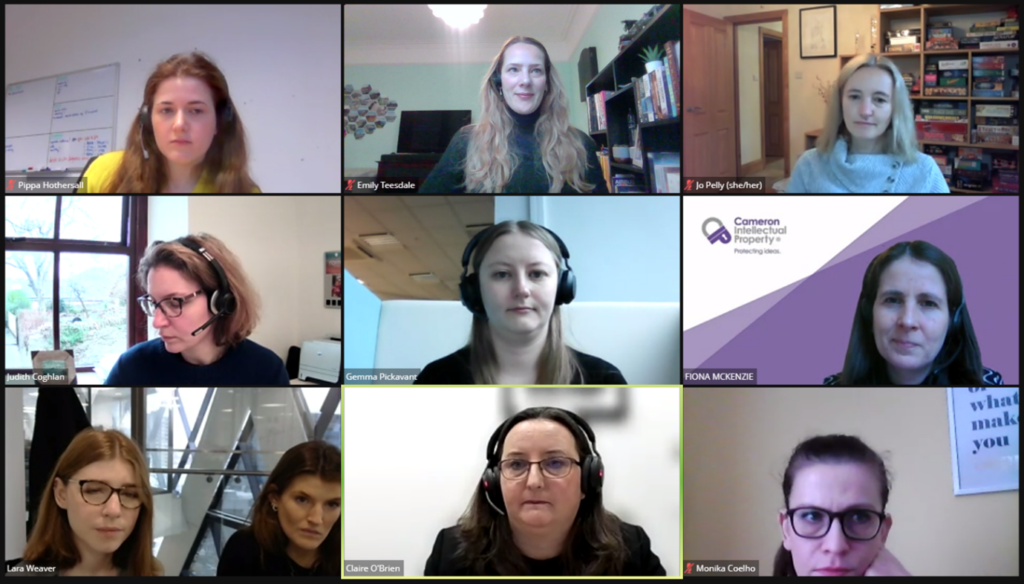 Co-organiser Emily Teesdale chairs another of the breakouts

3. What can companies do to reduce this type of behaviour and its impact, which disproportionately falls on women?

Office housework is always going to happen to some extent, so ensure it is acknowledged in appraisals and has a time code associated with it (where appropriate). If it’s on the appraisal form it encourages others to do it, and encourages people to mention when they are doing it. “Making the invisible, visible”. It also allows people to say “I’m doing too much of that and need to do less”. This can also help raise awareness of these often invisible tasks. If appraisers feel that these tasks are not a good use of an individual’s time, the onus is on the organisation to put alternative systems in place. On the other hand, these tasks help build a better workplace culture so should be valued. One attendee shared a story about working hard to organise several lunch events at a conference and receiving, as acknowledgement, the lovely surprise of a spa day voucher from her line manager.

Looking forward to the next coffee date?

If you enjoyed this discussion, and/or found these notes useful, you’ll be pleased to know the coffee dates will be continuing!

Huge thanks to Isobel and Emily for establishing the programme and organising so many successful events so far, both in-person and online. That they continued this excellent work throughout the Covid-19 lockdowns is testament to their generosity and tenacity. They now hand over to new co-organisers Michelle Montgomery and Wendy Peet, who are hoping to organise the next coffee date in the early autumn. Keep an eye on the Women in IP webpage for details…

If you’d like to help  by hosting a future coffee date in your region (either in-person or online), or by facilitating a virtual breakout room, please contact Michelle and Wendy.