In the run-up to International Women’s Day, we published a series of blog posts around the theme #BalanceforBetter. Almost all of our contributors – female and male – mentioned how more flexible working practices have helped to improve the workplace gender balance, and how we should continue to push for greater flexibility, for the benefit of professionals of all genders.

With that in mind, we’re delighted to be able to publish here an article written by Stuart Greenwood of AA Thornton, which first appeared in the March 2019 CIPA Journal. Stuart is a UK and European patent attorney and has worked at AA Thornton for 11 years. Inspired by the IP Inclusive “Flexible Working” event in November 2018, he tells of his experiences as a part-time Patent Attorney and full-time Dad, and the support he receives from his employers which enables him to balance the two.

It is half past eight in the evening and I have just commando crawled out of my daughter’s bedroom after spending the last hour lying prone on the carpet, my arm squeezed through the bars of her cot and my hand resting gently on her tummy, trying to get her to fall asleep. The white noise is on. All my fingers are crossed. And I am creeping slowly down what at this moment in time seem like the world’s creakiest stairs, praying that the little orange bars on the baby monitor I am clutching don’t crackle into life, accompanied by a disheartening squeal indicating that she is in fact [once again!] wide awake.

Lying on the floor doing “tummy hand”, as it became known in our house, was one of a few slightly odd routines I am sure all parents can relate to. When you are desperate for sleep, or even just a break, and you find something that works, you convince yourself to repeat the same particular routines, however arm numbing.

An evening such as this is now thankfully a thing of the past. Our daughter is 4 (“and a half daddy!”) and glossing over the fact that she likes to wake up around 6:00am, sleeps perfectly. We also now have a six-month old son who, by some miracle (and I really hope I am not jinxing it), settles himself down to sleep comparatively easily, without the need for a prostrate father with arms as limp and flexible as overcooked asparagus. 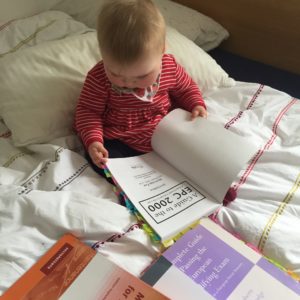 When our daughter was born, my wife went on maternity leave and I took the statutory two weeks off with a further week of holiday tagged on for good measure. What I certainly didn’t appreciate before the birth was just how much that perfect little bundle of smiles, screams and poo was going to change my outlook on life.

It was always our plan for my wife to go back to work after seven or eight months of leave and for me to take advantage of what was, at the time, the relatively new option to take the remainder of the 12 months as shared parental leave. After that our daughter would be looked after by some combination of a nanny and grandparents. We had no firm idea of the exact plan.

I don’t remember it very clearly, but we emerged, bleary-eyed, from the first few weeks of parenthood and settled into some kind of routine. A routine inevitably interspersed with the odd “she must be teething” night, but a routine nonetheless, and as the weeks went by I have to admit, my daughter started getting a lot more interesting.

First there are smiles. Then laughter. Then they learn how to blow raspberries and it is the greatest thing in the world. Then they can sit up. They can grab things. Then comes this fabulous golden window where they actually believe you can produce things from behind their ears and they look at you like you are some kind of super hero. It was during this stage that I got hooked.

When it was my turn to take over and my wife was due to go back to work I remember very clearly we “transitioned” over the Christmas holidays. This was a two-week boot camp for both me and my daughter. I practised feeding her with the bottle and getting her down for naps, and she got used to the idea of someone who, until now, she merely saw as an outstanding and gifted magician, being her primary nappy changer.

The first few days were daunting. The first time I went to a ‘mum and baby’ class, I felt like I stuck out a mile. I was the only man, we all sat down crossed legged on the floor, the tambourines were handed out and we started singing. I didn’t think I’d be saying this, but I loved it.

I remember very clearly the meeting I had where I asked if it would be possible to return to work part-time.

There were already a number of female, non-fee-earners, who had returned from maternity leave to work part-time, but there was no precedent for a part-time fee-earner. There was also no precedent for a part-time male staff member. Added to this, I had only quite recently qualified as a chartered patent attorney, and not yet as a European patent attorney, so I had a distinct level of apprehension at asking whether I could cut my time down to three days a week.

It turned out that I needn’t have had any apprehension at all.

My line manager was very supportive. He took the request completely in his stride and said he would support me as I talked to HR. We then discussed my thoughts on how to manage the transition and what seemed like a very short time later, I got the approval.

When I had gone on leave I had handed over all my cases evenly to members of my department. When planning my return part-time, I took that handover spreadsheet and simply selected 60% of the cases to take back.

One of the great things I find about working as a patent attorney is your autonomy. The time management of cases is really down to the individual so when I am out of the office a case won’t have been progressed by a team in my absence, potentially leaving me behind. Also, as long as I have an Internet connection, I can keep on top of client correspondence and examiner responses, etc. in a light-touch way on my days off, checking emails in the evening and during the baby’s naps during the day, and sending things on to be processed. I do this not because I am “fire-fighting” a steady stream of emails that would be hard to keep on top of otherwise, but because I am genuinely interested in my work. When I am away from the office, I look forward to returning and feel I hit the ground running each morning because I have kept on top of things during my time away. And by the end of a few days in the office, I am looking forward to my time with my children again. I feel as though I have a renewed energy for them, which makes the days fun.

I am very proud to say that there are now quite a number of attorneys at my firm with young families that work part time. Our firm is wonderfully supportive of flexible working arrangements – through part-time work, but also through flexible working hours, working from home, and supporting flexible maternity and shared parental leave.

Shared parental leave and part-time work is by far the most rewarding thing I have ever done and I would do it again at the drop of a hat.

In fact, I am. I will shortly be going on leave again; this time to look after my son until his first birthday.

I will need to practise a couple of magic tricks, but this time I feel a lot more ready than before. Monkey music here we come.