Bringing your whole self to work: Women in IP / IP Out coffee date

Our Women in IP community hosted their first coffee date of 2021 on the afternoon of Thursday 14 January. It was a joint event with IP Out, on the general theme of “bringing your whole self to work”. Co-organiser Isobel Barry, from the Women in IP committee, tells us some of the key discussion outcomes.

The first coffee date of 2021 was a collaboration with the IP Out networks and involved well over 100 people across the UK. The topic was “bringing one’s whole self to work”, which is an issue often on the minds of LGBT+ people but relevant to all. Three questions were set for discussion, and I have collected together the thoughts of the various groups below.

These coffee dates continue to be “fascinating, thoroughly enjoyable and extremely supportive”, in the words of one regular attendee. If you’re curious, come along at 2 pm on Tuesday 9 March for a tie-in with February’s “Quick Wins” event. 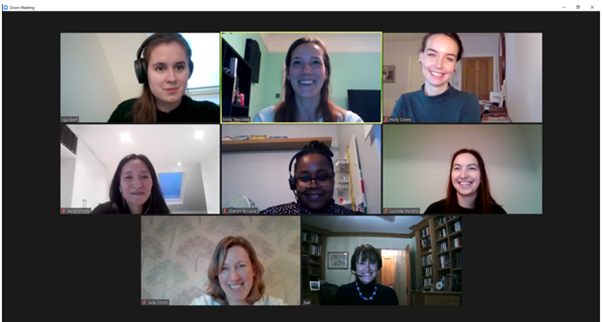 Screenshot from one of the London meet-ups

1. What do you think are the advantages and disadvantages to the individual of presenting their authentic self in the workplace? What aspects of themselves do you think people commonly hide and why?

Suggestions of the aspects of themselves that people might hide at work included religion, political leanings, mental health, sexuality, gender identity, clothing styles and neurodivergence. In many cases, the act of hiding aspects of one’s identity is not conscious but has been a coping mechanism for many years. This is not always the case though: a large number of LGBT+ people go back “in the closet” when they leave university and enter the workforce. On a slightly different note, one person pointed out that women are socialised to help people and smooth things over, which can mean hiding how you really feel. Being your authentic self means accepting that perhaps not everyone will like you, and there was speculation that women find this harder than men, in general.

Some people spoke about the aspects of an identity that can’t be hidden, and those than can. For example, one usually can’t hide being a woman, but one can hide aspects such as being menopausal. Similarly, one usually can’t hide being a man, but many men may not be open about the difficulties of parenting. In another example, a person’s ethnicity might be evident, but there are visible aspects and non-visible aspects of this: in some cases there can be pressure to tone down social expressions of heritage, which leads to one not being their authentic self, and which perpetuates misunderstandings of cultural heritage. On another note, being out as bisexual is not binary (out/not out) but has different degrees in different situations: there is a tendency to assume that a person is homosexual or heterosexual depending on their partner, and bisexuality can be invisible.

Most people agreed on the advantages of bringing one’s whole self to work. Hiding aspects of oneself takes huge amounts of energy, and takes away from your ability to do your job and to interact with friends and colleagues at work. It means that any positive affirmation a person receives can fail to improve their self-esteem because that affirmation is disconnected from their authentic self. On the other hand, some people are simply private, and we cannot expect everyone to want to share everything, irrespective of the supportive environment.

Further, one still needs to add “professional gloss” to their interactions especially with clients or in court: one person described this as your authentic self being a “mosaic” with your job being one tile of that. However, one group discussed how implicit rules can hinder expression in the workplace, and that it seems unfair that you are required to be “professional” without having an agreed definition of what this means. Does this mean that people simply change themselves to fit in, or leave? This cannot be positive for diversity. In addition, it is sensible to consider your audience: dressing too formally in a meeting with scientists or engineers could put up a barrier between them and you.

Importantly, most of us feel more comfortable with people who do bring their authentic selves to the workplace. One person commented that they find it difficult forming even professional relationships with colleagues if they feel like the other person is holding back or hiding something. People being themselves means that all of us can learn from each other’s very different experiences. Being open about aspects of ourselves can help with networking and business development with similar people. In addition, being open at work serves as a great role model for others: the more able you are to be yourself, the more you can encourage other people to be authentic.

Disadvantages can include being pigeonholed and in the worst cases having to deal with difficult remarks and discrimination. Usually the fear of these consequences is out of proportion to the actual risk, but many people emphasised that until they take the step of opening up they do not know how colleagues will react. Some people confessed to being over-sharers at times and said that this had done them damage in the past when reactions were negative. It has taken them a long time to feel comfortable opening up again.

2.  How do you think people can be encouraged and supported – by colleagues and employers – in presenting their authentic selves?

It was generally agreed that we need to lead by example and that senior role models are helpful in showing that being one’s authentic self in the workplace is not a bar to success. This can be difficult for private people, but the positive effects cannot be overstated. The more stories people hear from those with experiences other than their own, the more people will feel comfortable talking about their own situation. Still, finding out about aspects of someone’s authentic self can require keeping an ear to the ground, which some thought was sad. On the flip side, that can also be a natural way for information to disseminate without making a big deal about it.

As individuals we are all different but we also all have a duty to compromise and let others feel welcome. For example, we can ensure that we talk about topics that others can join in on, and that we ask and respect the opinions of others. We can ensure we allow quieter people to contribute – and ensure they are invited to social occasions – without putting them under pressure if they do not want to. We should also be allies and ensure that people are challenged (politely, in a calm, non-aggressive manner) if they have made a thoughtless or dismissive comment and that people who do this challenging are supported.

Organisations can help by increasing diversity and advertising their commitment to it, for example by having associations with IP Inclusive and its networks. Some commented that they found it very positive when their work had posted considerations of meaning of Christmas and Hanukkah on the intranet. Organisations can promote awareness of and attendance at D&I type events, and promote the importance of allies for all causes. Allies can wear a rainbow lanyard, IP Inclusive ally pin or similar to show they can be approached about D&I issues. Diversity and inclusivity training is an easy win, although people do have to be genuinely open to the concept.

One less common approach to encouraging people to be honest about themselves is having everyone give a score of how they are feeling that day in a regular meeting. There is no need for explanation, and it can be the result of home and work combined. This can be a really good way of gauging how to deal with, support and encourage others and to help us be mindful of those having a bad day.

Usually, we don’t wanted to be treated differently when showing our authentic selves, although in some cases (eg neurodiversity, menopause, certain faiths) a person might actually be hoping for accommodations in working practice to suit their needs. This cannot be given if people don’t feel able to be open about themselves. With this in mind, it is important for organisations to be accepting in an active, not just passive way. For example, if you would be receptive to requests for flexible working, you need to say that, not just be willing to say yes if someone asks, because they may not ask if they don’t know.

3.  How do you think lockdown has affected this issue? Is it easier or harder to present one’s whole self to colleagues, and is it more or less relevant when we are in our own homes?

In some ways, lockdown has helped. Through necessity people have become less concerned about hiding things, and people are forced to reveal more of the rest of their life. Many people are more relaxed away from the workplace: being in your own home is a safe space, which may make it easier to be your authentic self. The dress code is also more relaxed, which allows for more self-expression. Backgrounds during video calls can be more expressive at home – the initial worry of what was visible is dissipating, and interesting items in the background can be conversation starters.

In addition, the pandemic has led to increased connection between people on a more personal level. Asking how people are – and getting a meaningful answer – is much more natural now. Some think that lockdown has made us more human, and maybe made us kinder. It is much easier to be open about mental health problems, as everyone is struggling to a greater or lesser degree.

On the other hand, it is easier to hide over zoom, especially in big meetings. The normal mechanisms of getting to know each other like bumping into in the corridor don’t happen. This can be helped by having catch-ups in smaller groups, using breakout rooms and software that allows people to mingle. One mental health first aider explained that the working from home situation had made their task much harder. In addition, we need to remember to respect the boundaries of private or introverted people – it is ok not to want to share everything! 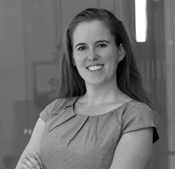 Isobel Barry, Women in IP and IP Out committee member