Our Women in IP community hosted another coffee morning on 29 June 2021, with the theme this time being “New Working Models”. We had virtual gatherings around the country for a chat about the topic.

The questions we discussed were: 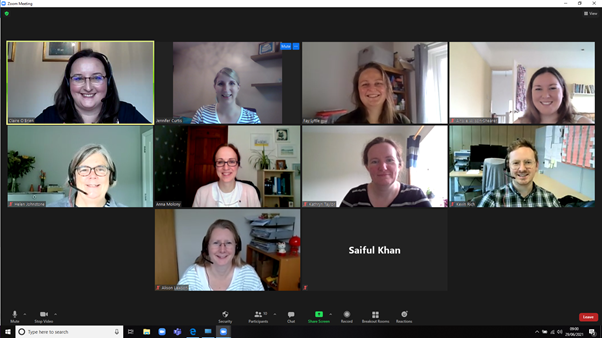 A screenshot from the Birmingham call

Women in IP committee member Emily Teesdale has kindly collated some of the thoughts and discussions we had.

1. What working models do you think we will start to see more of in the “new normal”? Do you think they will be used to the same extent by all genders?

There was a general acknowledgement that organisations will not look the same, ever again. Even going in to the office now will not mean you have access to the people, face-to-face, that you used to. There will be a greater requirement for more flexibility (ie not sticking to a structure of when we will be in or out of the office) and an increased number of people working various hours.

Generally, the anticipation seems to be some sort of hybrid working with a 2/3 day split either way. However, it is difficult to anticipate what variations we will see until restrictions lift and we have had a chance to see how it works.

In terms of the gender split, some felt there was a danger that if the traditional roles remain (eg in terms of childcare, and women still tend to do the school run etc), there may be more of a tendency for women to work from home than men.

However, others felt that working from home has given more men an opportunity to take more of a share of caring responsibilities. And if both parents work and both have seen the relative merits of spending more time with family, that may help to redress the balance.

One group felt that the challenge and opportunities of working from home had been grasped by all genders and there was hope that gender would not affect which working model is used. In essence, “different people have different requirements, irrespective of gender”. 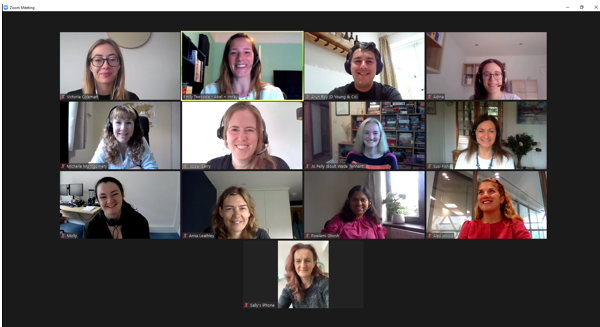 2. Do you think working away from the office more will affect the ability to get support/sponsorship, or otherwise be a negative?

One group felt that, on the basis that there’s a good reason for office environments to develop in the first place, the argument is still strong that being within the same physical environment helps with cohesion and collaboration.

Negatives were concentrated on training and pastoral support, some individuals saying they are more productive but the question is at what cost? Does this mean those that would have disturbed them previously are now losing out, for example, in developing their softer skills, such as dealing with difficult customers, which is generally learned in the office listening to partners on such calls/meetings? There were some concerns there may be an age split with older people staying at home where they have more space, and younger people who are perhaps house-sharing going in to the office, leaving a skills gap perhaps or cultural issues. The concerns were especially felt in relation to people who were new to the organisation or new to roles, missing out on opportunities to learn and fully integrate.

We are also not able to support a colleague coming off a difficult call eg you’ve overheard some of the call and can reassure them so they don’t take on all the pressure. Another point is that body language is missing from a video call whereas you can often tell how a colleague is by the way they arrive at work.

Cross-team collaboration came up a lot. It’s easier to forge relationships in your own team as there’s a “reason” to invest. It can be difficult to find that reason to talk to people in other teams now. However, on the flip side, technology has brought cohesion between colleagues in different national or international offices of firms and it is now easier to meet colleagues from those offices over video calls.

There is a risk of a perception that people working remotely are choosing not to engage with colleagues or want to work more individually. There was worry about losing the value of bouncing ideas around, especially as a group, and a tendency to gravitate to those who have stronger existing relationships.

Finally, working from home has meant longer hours and lack of separation between work and home life for some.

3. What strategies should we use to overcome/minimise any negatives?

Some of the ideas that were mentioned:

What work to do where:

See you next time!

Many thanks to everyone who joined, and especially those who hosted, the different sessions. Watch out for the next coffee session, which will be in September (details and exact date to follow: keep an eye on our Women in IP page). If you would like to be a host for one of the sessions (it’s very easy), please let Isobel know at Isobel.barry@carpmaels.com.